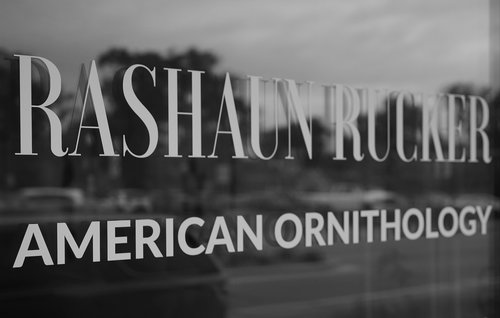 Rashaun Rucker is many things: a local and national Emmy award winner for documentary photography, a Harvard University Maynard Fellow, Black Enterprise Magazine Modern Man honoree, and an artist with the distinction of having his artwork featured in the HBO production, Random Acts of Flyness and the documentary, 12th and Clairmont. These are just a few accomplishments of Rashaun Rucker. As a fine artist, Rucker expresses himself not only through his photography, but in his drawings and printmaking. GMAS had the distinct pleasure of attending Rucker’s artist talk on November 16, 2019 at the close of his month long exhibition, American Ornithology, at M Contemporary Gallery in Ferndale, Michigan

While the drawings in American Ornithology may at first be haunting enough, the artist statement and recent gallery talk deliver the gravity and message. Rucker’s large drawings of black men bearing talons, wings, beaks or combs will certainly cause the viewer to stop and wonder. Rucker explained to a packed gallery audience of his desire to explore the black male identify in a body of work. Tiff Massey, an interdisciplinary artist and 2015 Kresge Fellow advised Rucker to approach his project in a nontraditional way and indeed he did.

The light bulb came on for Rucker as he felt hatred while shooing and wading though pigeons blocking a sidewalk in downtown Detroit. He thought, he said, people feel this way about black men. The research began. Rucker reached out to university ornithologists, the Audubon Society and conducted countless hours of research of the rock pigeon. In studying the rock pigeon, Rucker learned the bird was brought to North America around the beginning of the transatlantic slave trade. Brought to perform tasks, the rock pigeon delivered messages as carrier. Rucker explained further that pigeons are non-migratory birds that are usually found communing in groups in cities. Rucker saw parallels between the rock pigeon and black men.

Each black male image in American Ornithology shares anatomical features with the rock pigeon and taken together symbolize a marginalized people. Marginizational, as Rucker interprets it in American Ornithology, is a result of generations of conditioning men of color experience resulting in a belief that one cannot advance beyond the immediate surroundings.

Rashaun Rucker, a self described storyteller held the audience spellbound with stories of North Carolina childhood under the fierce protection of his parents and grandparents. He said his life lessons instilled in him by his family include hard work and education. Those experiences and memories inform his work.

Rucker has an ambitious exhibition schedule in 2020-2021 with his work being featured in galleries from Miami, Houston to New York. Graves + Mallett Art Solutions looks forward to future works from this cutting edge artist.