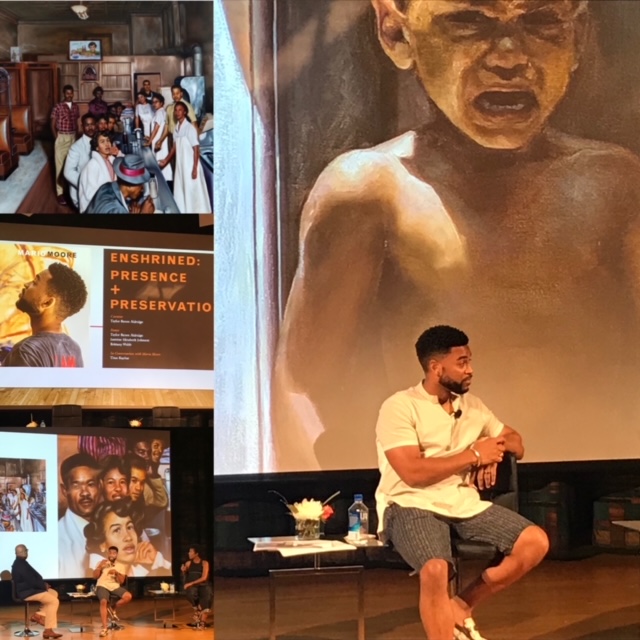 On a sweltering late-August Saturday afternoon, at the Charles H. Wright Museum of African American History, audience members witnessed a dialogue between visual artist Mario Moore and curator Taylor Aldridge – led by CWMAAH President Neal Barclay. They covered such topics as: finding the artist’s niche; the artist’s creative process; the role of visual art in the life of the community and of the subjects represented; as well as the duty to and commitment required to promote and preserve African-American culture. They placed these artistic considerations in the context of their vital role in the betterment of the Black community, Black people, and the future of evolving Black cultural expression.

The gathering was a celebration of Enshrined: Presence and Preservation, Moore‘s exhibition which opened on June 5, and of the publication of the 10year retrospective’s catalogue. The exhibition is curated by Aldridge, a renowned art critic and the program manager of the California African American Museum in Los Angeles. As curator, Aldridge brilliantly creates a roadmap of Moore’s art practice, tracing it from Detroit, to Italy, Connecticut, New York, and documenting Moore’s many stops in between.  The works in the exhibition taken together illustrate Moore’s growth as a visual artist as well as his ability to capture the humanity and dignity of his subjects in exacting detail.

A visual artist with roots in activism and education, Moore’s understanding of art history and American history is readily apparent. His immense pride in his hometown of Detroit, and in his family’s working class roots, is evident in his work and in his conversation.

During the on-stage conversation Barclay deftly projected a segment of Moore’s painting, I Continue to Dream, which was shown in his 2020 exhibition, Familiar, at the David Klein Gallery in Detroit. The painting was born of a revelation Moore had during a family gathering in Tennessee when his great aunt shared a treasure trove of family photos. Unaware that his great grandfather had been an entrepreneur, Moore recounted seeing a photo for the first time of the interior of a restaurant owned by his great grandfather in 1950s Detroit.  He said he sought to document this discovery on canvas, requiring a series of conversations with his grandmother, Helen Moore, a Detroit activist. As a young woman she had worked in the restaurant and so she was able to conjure up her memories of the finest details of the popular dining spot.

At the prompting of Barclay, Moore also shared the genesis of the painting, A Student’s Dream, the cover art on the exhibition catalogue. A voracious reader, Moore said he’d read Medical Apartheid: The Dark History of Medical Experimentation on Black Americans from Colonial Times to Present by Harriet A. Washington. The book’s photographs of medical experiments performed on Black bodies haunted him. Moore recalled making a sketch and then storing it away. Later, having undergone his own surgical procedure for the removal of a brain tumor, Moore revisited his sketch book and his pre-surgery image was the basis of that 2017 work – a melding of gratitude for the privilege of modern medicine with echoes heard from the cries of unwilling ancestors.

Moore was named the 2018-19 Princeton University Hodder Fellow. He’s only the third visual artist to be granted the fellowship in its 77-year history as it is traditionally conferred on writers, choreographers, composers and performance artists. He left a lasting impression on Princeton University and the Princeton Museum of Art. Both bodies acquired his work for their permanent collections, ensuring that more visual artists will have the opportunity to garner such recognition.

During his fellowship year, Moore spend time with the university employees whose work is largely invisible to faculty and students, yet their essential work keeps the school operating. These men and women of color who were performing blue collar work with dignity became his subjects and his work ennobled them, projecting their voices for the campus community to hear. Influenced by his upbringing in Detroit, a town with a rich history of labor and activism, Moore continues to use his canvas to tell the stories of his subjects from their perspectives, amplifying their spirit of tenacity in the face of adversity, dignity without disgrace.

Aldridge also hails from Detroit and is the co-founder of a journal of art criticism, ARTS BLACK, and has written and published extensively. She told the audience that it was an honor to work with Moore who she has known for several years and to witness his growth as an artist. As curator of Enshrined: Presence and Preservation, Aldridge said she sought to convey Moore’s progression. She noted that he is still considered an “emerging” artist by the dominant art world in a manner that showed she does not agree with that assessment.

Aldridge explained how the process of curating art varies depending on the artist she’s working with. She said she and Moore worked seamlessly together and chose to work inside the venue space. Moore then told Aldridge how important it was to him to have the largest survey of his work placed within a Black institution.  “These institutions raised us up,” Aldridge responded, describing Moore’s work as “truthful with a Detroit sensibility.” She said Detroit is a hard-working town and that Moore’s work ethic comes across on the canvas.

Listen to a full interview with Mario Moore on the Graves + Mallett podcast, Open Studio: Conversations on Art, available on Spotify, Google or directly from the website, www.GravesMallett.art.