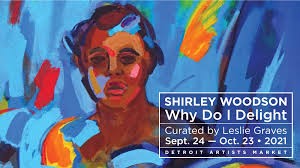 Why Do I Delight, a solo exhibition of the work of Shirley Woodson, curated by Leslie Graves, opens Friday September 24, 2021 at the Detroit Artist Market. Woodson enjoys the distinction of being named the 2021 Kresge Eminent Artist. A diminutive and modest octogenarian, Shirley Woodson is a giant in both local and national art arenas. As far back as primary school, Shirley made art and knew she would someday be a recognized artist. Encouraged by her parents and teachers who noted her artistic ability, Shirley pursued additional art training at the Detroit Institute of Arts on Saturdays from grade 7 through high school.

With her parents blessings, Woodson earned a B.F.A. in painting from Wayne State University, In the 1960’s Shirley joined Arts Extended, a group of artists of color, led by Dr. Cledie Taylor. Arts Extended gave Woodson a safe space and sense of belonging when exhibition opportunities were limited for African American artists. Artists Charles Finger, Barbara Wilson, Richard Kenny, James Wilson and Cledie Taylor were early members of the group. Arts Extended served as a supportive incubator for creatives to critique, exhibit and sell their work. Lacking exhibition opportunities with mainstream galleries did not discourage Woodson from her pursuits, rather, she continued her art practice while, teaching art in the Detroit Public Schools system, and earning a M.A. in art education.

In 1967, Woodson was accepted into a residency program at the prestigious McDowell Art Colony in Peterborough, New Hampshire.  McDowell, founded in 1907, is the first artist residency in the United States.  James Baldwin, Nell Painter and Leonard Bernstein are notable McDowell alumni.  During her residency, Woodson, characterized her time and work as transitional. “I was in the real world in my first non school related studio having no one to report to.”  There she experimented with collage and drawing while working on metallic paper.

Upon returning to Detroit, Woodson had her first solo show at Wayne State University. Beach Scene, a mixed media work, created during her residency, was featured. This same work was selected by Lindsey Patterson, assistant to Langston Hughes and published in the third volume entitled The Negro in Music and Art, which is part of the multi volume anthology, International Library of Negro Life and History, complied by noted historian, Dr. Carter G. Woodson.

An established gallery owner in northwest Detroit told Woodson in the early 1960’s to stick to watercolor. Lucky for us, Woodson did not heed this advice. Anyone who has seen Woodson’s body of work knows her figurative abstractions of vibrant colors and bold brush strokes are her signature. The contrast between early muted works of Woodson and her later use of strikingly brighter hues is noteworthy. When asked about this change, Woodson referenced her traditional art training and stepping out of academia.  “I put it all down and I did what I wanted”, Woodson remarked. Along with richly colored canvases, recurring themes of water, the stallion, fish and bathers appear in her paintings.

Arts education for Woodson has not been limited to the classroom. Shirley has influenced artists and collectors alike as a national officer for the National Conference of Artists (NCA) founded in 1959. Shirley and her late husband, Edsel Reid were founding members of the NCA  Michigan Chapter in 1974, creating  community based art education programming, artist mentoring and exhibition opportunities, a monthly lecture series, annual art auction and quinquennial luncheon to honor leaders and unsung heroes in the field of visual arts. Woodson continues to encourage and promote art students, emerging artists and hobbyists in their art practice. A self-described fan of Instagram, Woodson follows many artists and is generous with her comments of their recent works.