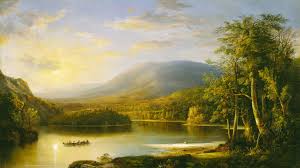 Bit-by-bit, African American artist, Robert Duncanson, whose work is in major museums in the United States and Europe, is becoming better known to art lovers in our time, a century and a half after his death.

Born in Fayette, N. Y. in 1821, he was educated in Canada. He moved to Cincinnati in 1841, then a diverse city of planters, abolitionists, European immigrants and free persons of color.

Largely self taught, Duncanson shared his sketches with several Ohio abolitionists and was introduced to influential artists. During this period, he painted a series of landscapes on the walls of the mansion of art patron Nicholas Longworths’ mansion. Covered in wallpaper by a subsequent owner, those were uncovered in 1932 when the mansion became the Taft Museum of Art.

Duncanson moved to Detroit in 1843. During that time he painted the portrait of Governor Lewis Cass, second governor of the Michigan territory and Andrew Jackson’s Secretary of State and of War, which hangs today in the Michigan State Capital in Lansing. But failing to prosper as an artist in Detroit, Duncanson returned to Cincinnati in 1846. There he had numerous commissions and patrons.

Duncanson traveled to study art in Europe, immersing himself in his work and making contacts with other artists. Upon his return, he produced many more landscapes in the style known as the Hudson River School. He and Henry O. Tanner were the first African American painters to receive international acclaim. His work which can be viewed in major museum collections including the Detroit Institute of Arts; Taft and Cincinnati Art Museums, Ohio; California African American Museum, Los Angeles; National Museum of American Art, Smithsonian Institution, Washington D.C.; National Gallery of Canada, Ottawa; and Sweden’s Royal Palace, Stockholm, Sweden. Duncanson was installing an exhibit in Detroit when he became ill and died on December 2, 1872.

His burial site was unmarked for nearly 150 years. But thanks to Dora Kelly, an artist based in Monroe, Michigan and the Detroit Fine Art Breakfast Club, Duncanson now has a black granite headstone engraved with a quote from the artist, ”I have no color on the brain. All I have on the brain is paint.”

Kelly became interested in Robert Duncanson in 2017, and after discovering Duncanson was buried in Monroe, she set out to locate the grave. Michael Huggins, the manager of the Monroe’s historic Woodland Cemetery, reviewed cemetery records. Huggins located Duncanson’s grave, unmarked, and the plots of several Duncanson’s relatives. Kelly started a fundraising effort with her own gift to purchase a headstone for Duncanson.

Dan Graschuck, a Detroit based photographer, presented Kelly’s mission to the Detroit Fine Art Breakfast Club. Commonly known as The Breakfast Club, its members are artists, collectors and gallerists who meet weekly at a restaurant to share art. The Breakfast Club raised the rest of the money needed for Duncanson’s headstone through art raffles and an art auction. The headstone was displayed at the Detroit Institute of Arts in its American Wing from June 23 through July 5, 2019 near Duncansons’ landscape, Ellen’s Isle. That work was first owned by Massachusetts abolitionist Charles Sumner, who was infamously caned in his chair in the U. S. Senate in 1856. Afterwards, the headstone was installed at Duncanson’s grave in Monroe.