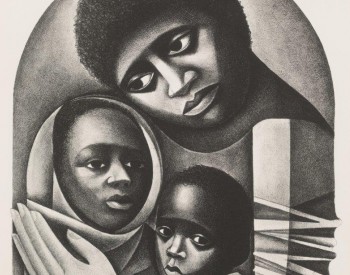 The Detroit Institute of Arts mounted an exhibition of art held by local patrons. Detroit Collects: Selections of African American Art from Private Collections, is a stunningly beautiful and important three gallery exhibition which opened last November and runs through March 15.

The sixty works, generously loaned by 19 metro Detroit area collectors, consists of sculpture, painting, drawings, photography and woodcuts by African American artists. The works span 160 years, the oldest work by Robert Duncannon’s 1856 Flight of the Eagle. The Smithsonian American Art Museum notes that in the 1860’s, “the American press proclaimed him the ‘best landscape painter in the West.” The newest work is the 2017 untitled work of Kerry James Marshall. His Past Times hung in Chicago’s McCormick Place for many years before being sold to Sean Combs for $21 million.

Detroit Collects is a rare opportunity for Museum visitors to see a wide range of work by artists of color spanning generations. The gallery walls are painted in aubergine and blue grey create a dramatic backdrop for the presentation of the art.

Flight of the Eagle, painted in 1856 by Robert S. Duncanson, (1821-1872), a free man of color who worked primarily in Cincinnati before studying painting in Europe, is on loan from the collection of former Detroiter Dr. Walter Evans MD. Duncanson had many patrons in both Cincinnati and Detroit where he lived from 1843 until returning to Ohio in 1846. In 2006, the DIA exhibited 70 works from the Walter O. Evans Collection of African American Art.

At the entrance of the gallery on an elevated platform, is a life size, embellished costume known as a Soundsuit designed by Nick Cave. The artist earned a Master’s in Fine Art from Cranbrook Academy of Art. In 2015 Cave had his first solo exhibition at Cranbrook Art Museum. His travels around Detroit in his embellished Soundsuits were documented in a postcard book titled “Nick Cave: Greetings from Detroit.” Visitors to the exhibition are treated to a 1 minute video montage of Cave’s Soundsuit Invasion photo shoots in locations around Detroit.

An exhibition of this size and magnitude is important for the Detroit Institute of Arts in its continued effort to demonstrate its commitment to diversity and inclusion. The first non-African American Museum with a permanent collection of galleries devoted to African American art made possible by the General Motors’ GM Center for African American Art endowed in 2000 and the curator appointed the following year.

Detroit has a history of being home to a community of creatives. When artists of color were limited by the lack of opportunities to exhibit their art in mainstream galleries and museums, they created their own, forming artist cooperatives and galleries. Detroit Collects succeeds in sharing with the community examples of collectors of color who exemplify the importance of collecting art by African American makers to support artists economically and preserve our legacy.

While Detroit Collects is an important exhibition for the community, it is not without its shortcomings. The glaring absence of the work of African-American women artists is noteworthy. Elizabeth Catlett, Clementine Hunter, Artis Lane, Brenda Stroud and Carrie Mae Weems are the only women artists represented in the exhibition. However, the fact that the paintings of two local women artists of national acclaim, Shirley Woodson and the late Gilda Snowden, were not included in the exhibition is curious. Lastly the timeline at the conclusion of the exhibition fails to mention Josephine Harreld Love (1914-2003), founder of Your Heritage House. Educated at Spelman, Julliard and Radcliffe, Mrs. Love was a trained concert pianist and arts advocate who founded the institution which for decades provided Detroit children with exposure to fine arts and culture. 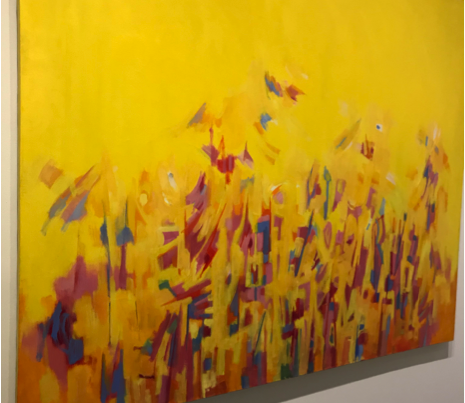 The History of Black Abstract Art from the Joyner/Giuffrida Collection