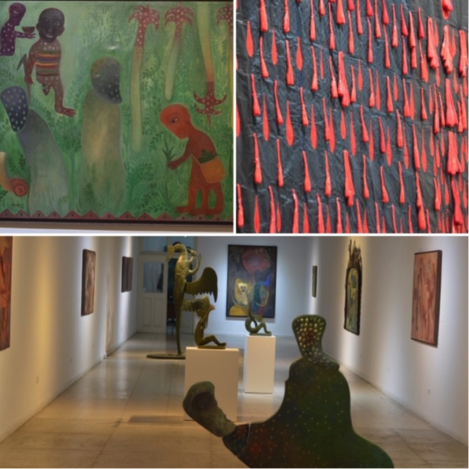 Graves + Mallett Art Solutions sat down with art collector, world traveler, and cultural ambassador John Bolden to discuss his experience at the 2019 Havana Biennial in Cuba during the month of April. John shared the excitement of a two-week adventure in the capital of Cuba. While the Havana Biennial is a month long celebration of everything art, John Bolden packed in the sights and sounds during his two week stay. This cultural explosion of art and culture with participating artists representing over 45 countries put Bolden on an exhilarating journey through numerous cultural centers in Havana. As he explained to GMAS, the Havana Biennial was established in 1984 and is held every other year. The work of artists from Africa, Asia, South America, the Middle East and the United States can be seen outdoors along the famous Malecon. Many of the pieces are suspended from public building designed with such detail that the buildings are architectural works of art themselves and contained in Museums, galleries and other known cultural centers such as the House of Africa and the House of Asia.

Not only was Havana brimming with visitors taking in as much as the art scene as humanly possible, Bolden observed how the Cuban residents participated in vast numbers and were widely represented at every public and private offering. Bolden further noted how children of Havana were engaged daily in a variety of planned art activities led by artist who worked with them in small groups in public spaces. He is no stranger to Cuba and has traveled extensively there over the last several years. He noted the warmth exuded by the residents and visitors alike.

At a gathering of individuals from across the global coming together to celebrate art and culture, Bolden found it easy to meet the artists who were very welcoming and eager to share their work, influences and ideas on future projects’. The Wifredo Lam Center takes great care in coordinating the Biennial. Using the tool of engagement to cross boundaries, the Center provides experiences aimed to include not only Cuba’s youth, but senior citizens whom Bolden observed making art.

Cuban born artist Manuel Mendives, is a celebrated artist in Cuba. His work can be seen in galleries and the permanent collection of the Museo Nacional De Bellas Artes. Bolden was in a crowd when Mendives arrived at an outdoor gathering and described the crowd as electrified by the presence of the artist, snapping photos of the octogenarian who has rock star status in Cuba. Bolden contrasted the frenzy the paparazzi create over sports figures and actors in the United States.

Ever the keen observer, Bolden described visual art presented in a multitude of forms during the Biennial as challenging visitors to see art beyond a flat canvas. Given the variety of nontraditional installation styles, the viewer not only engages but must stretch beyond tradition. Bolden says, “You can see all of the possibilities.”